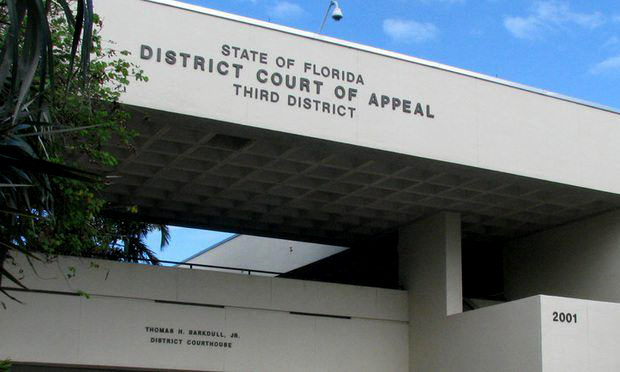 Florida’s Third District Court of Appeal has ruled that a bank that had taken title to two condominium units was entitled to its attorney fees from a condominium association just as any other condominium owner would be pursuant to Section 718.303(1), F.S.

The Ocean Bank v. Caribbean Towers Condominium Association, Inc. case began when Ocean Bank foreclosed on two delinquent units in the Caribbean Towers condominium community in North Bay Village. The bank properly named the association as a defendant in both actions. Ultimately, the bank took title to both properties at its own foreclosure sales. The bank then attempted to sell the properties and ran into a stumbling block when the association’s estoppel certificates demanded payoff amounts almost nine times and more than 13 times higher than the statutory maximum known, in the vernacular, as “Safe Harbor.”

Well, lenders will tell you the statutory cap was needed to encourage them to continue making loans in condominium communities. Association members will tell you that the cap is there because bankers have one of the strongest lobbies in our state and that is the case in most other states as well. The genesis of the Safe Harbor cap is not as important at this point as the fact that it is the law as interpreted in this and other cases.

Due to the wrangling with the association over the non-conforming estoppel certificates, the bank was forced to delay its closings on the units and filed post-judgment motions against the association requesting that the Safe Harbor statutory cap be applied and seeking an award of attorney fees. It is important to note that both trial judges ruled for the bank on the merits of their case, with one judge referring to the association’s position as “frivolous.”

The Third DCA ruled that the bank was entitled to an award of its attorney fees since it owned both units and it was the prevailing party in its dispute with the condominium association.

There are not many association members out there who are feeling overly generous toward banks right now. Most association directors would appreciate having the statutory cap removed entirely so banks that take title to these delinquent properties would be forced to pay all amounts owed, not just the lesser of 12 months’ past due or one percent of the original mortgage debt. Since that legislative change is not likely to happen any time soon, if ever, the most prudent course of action is for an association to follow the law when it comes to demanding amounts owed from lenders who meet the statutory threshold. Yes, there are some lawyers and collection companies that will tell you that there is enough wiggle room in the statute to demand more than just past due assessments and they will also tell you that their arguments have prevailed before. However, that doesn’t do much for the Caribbean Towers Condominium Association that just got slapped hard and is paying the price. Rest assured, banks’ counsel never come cheap and these association members must now foot the bill.

It is curious that the case was only appealed on the basis of the bank’s attorney fee claim and not on the merits of the amounts being demanded on the association’s estoppel certificates. Did the fear of having binding precedent on that issue narrow the scope of the Ocean Bank appeal?

Was there foreshadowing involved when the Third DCA chose to specifically quote the trial court’s admonition that the association’s position was frivolous?

The Ocean Bank appellate decision is now binding on all trial courts throughout Florida unless and until a conflicting appellate decision is issued. It doesn’t take a leap of faith to believe that this decision is likely to embolden other banks to push back and hard against associations that do not honor the current law as it pertains to a bank’s statutory maximum for past due assessments.

Stay tuned and if your board of directors is thinking about pushing the boundary on Safe Harbor, get an indemnification from the person or firm doing the pushing that is worth more than the paper it is written on or, better yet, operate within the safe boundaries of the Safe Harbor law.